Hi. Okay. I’m Dr. Alan Greenberg, and this is the third part of different elements. So, I want to talk a little bit about back pain and neck. I think the statistics are something like 66% of the population has neck and back pain.

So, homeopathic medicine is based on something called the law of similar. Meaning that if you can find a substance that makes the same problem, if you give that same substance in a very diluted dose, it’ll cure you. You’ve seen that on my other videos. It’s kind of like a vaccination in a way. So, how do I actually find that?

First, you describe the problem to me. For instance, I have back pain and it’s a stabbing pain, for instance. Sharp. It’s a stabbing pain. Also, by the way, not only do I have back pain but an additional complaint for me is I also have problems with my bowels. I go to the restroom too much. So, we have a secondary problem of diarrhea. Probably there should be another R there.

So, we get back and neck pain. I ask you to describe it. You say it’s a stabbing pain. Then I’ll ask you, “Well, where is it?” And you’ll say, “It’s in my lower back.” “And how often do you get this?” “I have [inaudible 00:01:40].” “And how intense does it get?” It can be up to a 10. This could be so bad it debilitates me.” Now, the easiest way for me to get to the homeopathic diagnosis is, we use something called a checklist. This is what the checklist looks like and this how it’s going to be used.

So, you’re going to go through it and you’re going to mark things that improve you and things that aggravate you. In other words, typical back stuff. Some people, getting out of a chair, rising from a seat hurts. Some people, it’s better if they lay down. Some people, it’s better if they walk around. Like, I’ll give you an example. I just had a patient that they came in with horrible congestion and allergies, and that was their main complaint, but they also had back pain. What she told me was, the more she moves the better she feels, but if she exerts too much, for instance. Like she helps a family member sweep and mop for the job, her back will get worse. So, she’s worse if she sits too long in the office, better if she walks around and moves, but worse if she over exerts.

Then we have to find the homeopathic medicine that has those symptoms, plus the congestion, which makes her sneeze and it gives her sore throats and she needs to use Afrin because she can’t breathe all the time and disturbs her asleep, and this makes up the whole problem. You’ll hear me say this kind of description from problem to problem because this is how homeopathic medicine works. It’s not the particular ailment that’s the problem, it’s the combination of all the symptoms, physical, mental, and emotional, that makes you sick. Then we give you the homeopathic medicine, you take five drops, you put in water, you take a teaspoon of it, you swish it around your mouth. Most people feel better within seven to 10 days and then usually within three to six months, they get cured. 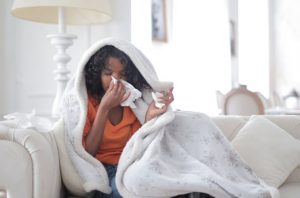 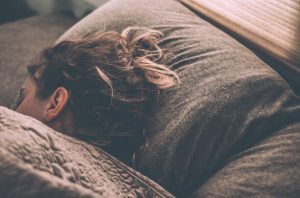